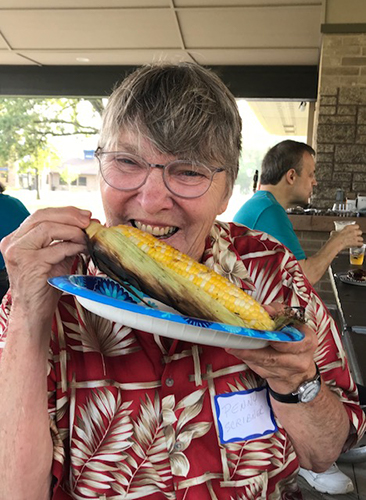 It was a most amazing afternoon. It was the Winnebago County Democratic Club’s annual Corn Roast. Corn roasting in the husks were on the ‘barbie’ and the smell of hot dogs wafted through the air. Cans of melted butter sat next to large Morton Salt containers and rolls of paper towels. Late summer in Wisconsin when the sweet corn is ‘high as an elephant’s eye’. And delicious!

Just about every candidate up and down the ballot was there. There was a feeling of excitement in the air. It was more than just a corn roast.

Gordon Hintz, 54th Assembly District, acted as MC and as usual, did a great job with his sense of humor and knowledge of everyone on the ticket. From those running for Congress: Beau Liegeois 8th District and Dan Kohl 6th District – to Lee Snodgrass who is running for State Senate to Sarah Godlewski who is running for State Treasurer. What spark plug she is! She lights up the room and has a four-point plan for fiscal responsibility. After a short break who should arrive but Mandela Barnes, candidate for Lieutenant Governor, and Tony Evers, our gubernatorial candidate. The message was up-lifting and positive. Democrats have a unified message and we are moving on. We are willing to work across the aisle to solve these problems, but we are not waiting. We have ideas and plans. Each candidate who spoke had a platform which included: public education/student debt (front and center – no surprise there); our environment and re-instatement of the Department of Natural Resources (DNR) as an independent, functioning department – focus on water quality; affordable health care (Badger Care); and repairing and replacing the aging, crumbling infrastructure.

Each emphasized different points, and some more specifically, but those FOUR pillars were included in every platform. Josh Kaul, Democratic candidate for State Attorney General spoke more of prison reform, the untested rape kits and human trafficking. I shared with Josh, and I do believe this, that the office of Attorney General is as important, if not more so, than that of the Governor. His office sets the standard for honesty, fairness, truth, and the rule of law.

The one question I asked Josh and other candidates I had time to speak with, was, “…if you could ask yourself one question – what would it be?” I asked a similar question of Rebecca Dallet last year when she was campaigning for State Supreme Court Judge (which she won by the way). She opened up to discuss women’s health care and a woman’s right to choose, which was not a formal part of her platform.

On Sunday I attended the Outagamie County Corn Roast. I do like corn! And once again there was an array of strong, up and down the ballot candidates beginning with Doug La Follette who is our current Secretary of State and has served in that office since 1974. If the name is familiar it is because of his environmental work including the beginnings of Earth Day with Gaylord Nelson. Once again there was an air of excitement. Yes, I do have questions for each of the candidates, but I do not want to play ‘stump the candidate’. I want to use questions as an opportunity to allow the candidate to shine and bring out the best of they are good at and what they have to offer.