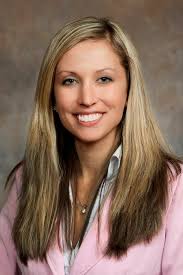 Amanda is one of us. A Wisconsin native, she is married to a sheet metal worker and together they are raising four children. She lives family values. She wants to go to Washington to fix things not tear them down. To work with everyone, not attack everyone. Amanda knows what It’s like to hold a crying child when you have no hea

lth care. She will go to Congress to improve health care not to repeal it like Trump and our current Congressman, Mike Gallagher.  The last four years under Trump and Gallagher have seen our country go backwards on protecting Wisconsin’s water, and natural environment. Amanda will not be supporting dirtier air and dirtier water in Wisconsin or elsewhere. She will not be voting for more oil drilling off the Atlantic and Pacific Coast and Alaska’s Wilderness.

If we want an America that works for everyone, we need Amanda, and people like her to change the culture in Washington. What she will vote for is improving main street and our crumbling infrastructure. Congressman Gallagher voted to give away a Trillion dollars to juice the stock market as if that was the most important part of the economy. Main street, and the middle class received little of the benefit. This giveaway to the rich was all borrowed money that will have to be paid back by Amanda’s children and yours. Imagine how many jobs would have been created if that money had been used to rebuild American instead of to pad the wallets of the wealthy?

It’s past time to start rebuilding America and putting America to work. The swamp is deeper and uglier than ever in Washington. Sending Mike Gallagher back for another term of doing nothing but voting NO on almost every bill and praising Trump’s disastrous policies will give us four more years of misery. Four more years of promising to fix health care and drug prices but doing nothing but restricting women’s access to birth control, cancer screening, and reproductive healthcare. Unlike Congressman Gallagher, Amanda will support women’s health care and vote to restore funding for it.

Amanda understands the importance of free public education and the need to support reform of college tuition. She has lived it. She is still paying for her college education. She won’t be supporting Betsy DeVos’ and Trump’s veto of bi-partisan legislation protecting the profits of fraudulent private colleges like Corinthian. She will support access to UW, and trade schools so that today’s young people can better themselves, earn a decent wage and build the families of our future.

Vote for change. Vote to retire Mike Gallagher and elect in his place Amanda Stuck for Congress in the 8th district of Wisconsin. Change will mean a better future for families, and for Wisconsin, for the country and for the forgotten middle class.