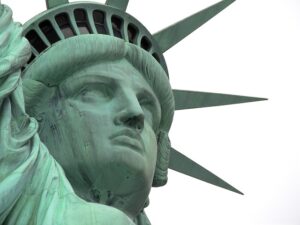 The answer is yes, provided everyone is permitted to vote. Voter suppression is the single greatest threat to our future as a democracy. I want to believe the hundred plus Republican members of Congress who swore to uphold the Constitution then voted against doing so, will stop parroting the “big lie” they know is false. Their own judges have told them that. But so far, their primary goals are restricting voting, and obstructing the passage of legislation in the Senate. This is not an agenda for rebuilding America. It is one for destroying it and democracy too. We cannot let one party continue to strip away the people’s right to vote.

President Biden has been moving the country forward and replacing confrontation with cooperation, lying with honesty and empathy, chaos with order. He is speaking plainly about the urgency of climate change, racial justice, immigration reform, and fair taxes. After one hundred days, the country is breathing again. As we head into spring hope is returning, schools are re-opening, Covid 19 is waning and the possibility of a robust return to economic vitality is growing. But cooperation in governing is not.

One-party democracy does not work in the long run. A healthy democracy needs at least two parties. President Biden and Senator Joe Manchin, among others, are right to seek bi-partisan solutions and to find common ground where possible. So far, the hand of cooperation has been repeatedly rejected. Nevertheless, we must keep trying if we want to have a thriving democracy. There are some hopeful signs that compromise may yet be possible on some issues. Corporate America is beginning to call for progress not destruction. Let us keep trying a bit longer.

There is, however, one issue on which there can be no compromise, and which can’t wait. That issue is the right to vote. The Senate must pass a comprehensive federal voting rights Act sweeping away unwarranted state enacted restrictions. The filibuster rule, already waived for judicial appointments must be waived for this one issue. For without voting rights we will no longer have a democratically elected government.