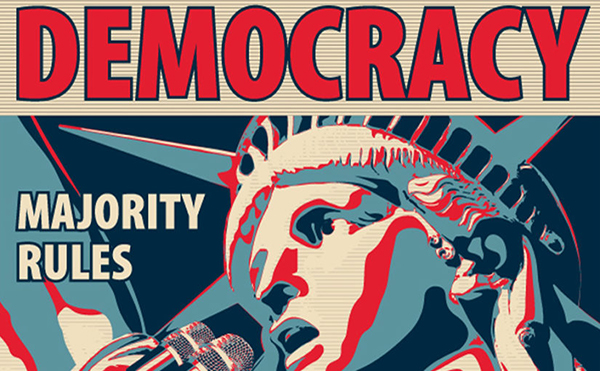 The most important problem facing America today is not Russia, China or ISIS. It’s rabid partisanship and the pursuit of political power at all costs. If not curbed, it will lead to the death of our democracy.

There is a bill in Congress, HR 1 (H.R.1 – For the People Act of 2019) that proposes to expand Americans’ access to the ballot box. It also proposes to reduce the influence of big money in politics and strengthen ethics rules for public servants. It needs to be enacted.

The first thing the bill would do is end the restrictions on voting that various states have passed solely to discourage voting. Next, it would require redistricting to be conducted in the future by independent, non-partisan commissions in each state like California does. This will correct the practice of partisan state Legislatures carving up voting districts to pack as many of the opposing party’s voters into as few districts as possible. In 2018, for example, in Wisconsin, 54% percent of the people voted for democrats. Thanks to gerrymandering, the other party won nearly two thirds of all the legislative seats. The majority’s vote was thus nullified.

This is undemocratic and wrong.

A third piece of HR 1 would provide funding to strengthen the security of the ballot box. Voting machines and counting systems, as well as who can vote, vary from state to state. Americans are less confident than they have ever been in the integrity of our elections. Hardly a day goes by that some company or government data system is not hacked. With marginal security, it is all but inevitable that in the next election there will be irregularities that affect the outcome. We can’t allow this to happen. HR 1 will improve ballot security.

Finally, there is a long overdue need to clean up campaign financing. Without full disclosure, of campaign contributions, secret rivers of money will continue to flow. Elections determined by secret donors are not fair elections. We will never eliminate all money from politics. However what we can do is reduce, if not eliminate, outright fraud and corruption by requiring honest disclosure of large donors including who is really paying for Media Ads. HR 1 addresses this too. It also encourages small donors.

Elections are the foundation of democracy. We have had two elections in the last twenty years when the candidate who got the most votes lost, with one that was decided by the U.S. Supreme Court. The 2016 Presidential election was the first in which a foreign power illegally played a secret and significant role. We need to strengthen our democracy while we still can. HR 1 does that in a non-partisan and sensible way.

Please read HR 1 for yourself. It’s on the internet:
https://www.congress.gov/bill/116th-congress/house-bill/1/text

It is our responsibility to our children and grandchildren to preserve our democracy. Learn about HR 1 and contact your Congressman and U.S. Senators. Preserving our democracy is our most important priority.