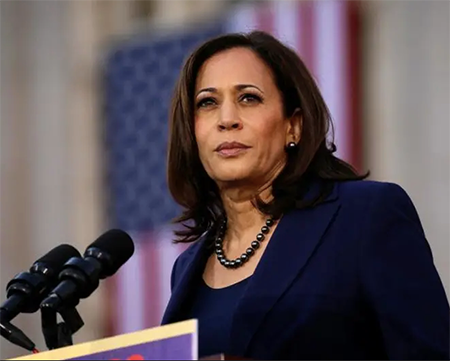 In life, luck of the draw and being in the right place at the right time often determines not only success but sometimes life and death itself. Kamala Harris is not the first and won’t be last politician to gain office because her life and events she had no control over came together in a way that benefitted her. The same is true for Biden.

The late John Lewis provides and interesting contrast. He swam against the tide at great personal sacrifice and succeeded in changing history by being an exceptional human being and being lucky he was not killed. Michael Schwerner, Andrew Goodman, Medgar Evers, Martin Luther King and Steven Biko in South Africa others equally brave as John Lewis were killed. Biden’s son survived military service and reached the position of Attorney General in Delaware only to be struck down by a brain tumor. Who knows where he would have gone in life?

Kamala, in California’s highly competitive political environment, did not claw her way to the top by tireless ambition and hard work nor demonstrate extraordinary commitment to liberal values or human rights, or consumer rights, in the way others did. She performed admirably in each of her positions as have many others. However, she did not make waves or major changes anywhere along the line as she advanced up a well-trod ladder in California. Pat Brown had been the District Attorney in San Francisco before becoming the Attorney General then Governor. Before him Earl Warren had climbed the same ladder starting as the District Attorney in Alameda County (Oakland) across the Bay from San Francisco before becoming AG then Governor then U.S. Chief Justice. Jerry Brown, after two terms as Governor and some wandering to India and Japan came home to be the Mayor of Oakland and using the name and the same ladder ran for AG and then Governor again.

In each of Kamala’s runs for office she has come from behind and beaten better known opponents by running a strong and well financed race and taking advantage of her opponent’s mistakes. In the DA’s race she beat an entrenched incumbent. In the AG’s race she came from behind and won a close election against a strong candidate. Once in office she has played her hand carefully, avoiding mistakes, and, like every successful politician tried to garner as much favorable publicity and name recognition as possible in each position with an eye to next rung or at least the next available opportunity.

The big question, if not the knock on her, is what does she really care most about and what will she do with the opportunity now before her and perhaps later if she runs for President in 2024?  Will she play it safe again? My best guess is yes. That is her job as it was with Biden to Obama. The other question is will he give her the assignments and authority to shine.  Her chances in 2024 will like 2020 depend on events beyond her control.

Being VP for the next four years may well be a career killer. The economy is in shambles. The world not much better.  I believe we will be better off in four years with Biden/Harris than with Trump/Pence. But we may be in terrible shape anyway no matter who is in charge. And if we are, she will be blamed and those now on the sidelines will be positioned to promise a better future.

As for Biden’s choice, Penny and I liked almost all the candidates quite a bit. I liked Whitmer and Bottoms the Mayor of Atlanta. Penny liked Val Demings. All would have been good VPs. All had more experience than Obama when he ran for President and of course much more than Trump.

However, the most important job of a VP is getting the President elected and on this criteria Harris was head and shoulders above the others with her experience. And, choosing a white woman like Whitmer were have been deeply disappointing to African Americans without whom Biden would be roadkill at this point. He had to choose a woman of color. Susan Rice, I believe was someone he felt would be a great governing partner. However, she would have been a big fat target for the slime attacks reprising the Hillary wars. Plus, she had never held any elective office. I have no doubt that if elected, she will be one of his appointments, perhaps as Secretary of State.

Kamala has the best chance of getting the ticket elected. Very important in my view is the fact that she is likeable with a big smile an easy manner and a prosecutor’s capability of striking back. She, of all the candidates was the one most likely to be able to handle the vicious attacks that will be the bread and butter of the Republican message. The other lesser known candidates like Val Demings and Bottoms were more of a blank slate for the Republicans to throw mud on that could be more likely to stick (no matter how false). If there were worthy skeletons in Kamala’s past, with her many years in office and previous campaigns, we would have heard of them by now. I believe the last two days have already shown, she is was not only the best choice but a popular one with women as well as African Americans. Maybe even many men, like me. The fact that she attended Howard University and was a member of the largest black women’s sorority in the nation was a bonus I overlooked.