I went to my own Women’s March in Chico! My daughter and my friends husband came with me and it was nice to have such diversity just in my little group! Younger gen, older gen, male and me! And there was such a turnout – all ages, genders, races, occupations! It felt so wonderful to be a part of something postive, to know that there are like minded people in the world. All we want is common sense humanity, equality, freedom and the chance to look forward to a future that the world is going to be a better place! If I have to get out and march for those rights, then here I am!!

From Chico Action News: A year after thousands in Chico joined together to protest president trump’s inauguration, on Saturday, possibly nearly double took to the streets in downtown for the “Women’s March.”

Click on the picture for a great article from the ER:

And finally here’s the video I took, it’s a bit long – I got caught up in the mood! 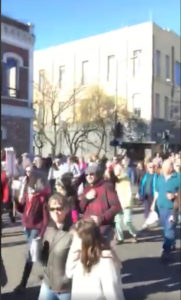