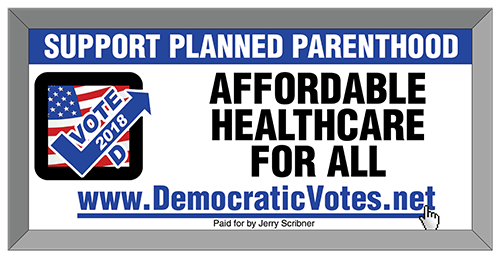 We are feeling good about the overall change we are seeing in the electorate.  Each passing day brings more awareness of how bankrupt the Republican Agenda for America is and how totally inept if not corrupt our President is.  There is no joy in saying “I told you so” to the people who voted for this administration and Republican Congress and many who did or who didn’t bother to vote at all are loath to admit any of this is their fault.  That said, more and more people are recognizing the need for change and know their first major opportunity will come in November 2018.

Less encouraging is the continued lack of awareness that elections are about who will have the power to make change.  It is not going to be one individual wonderful candidate who agrees with you on every issue but either the Republican Party now in power or the Democratic Party which is the only other team on the ballot.  Also attached is an OP-ED I wrote recently that speaks to the longing for the “messiah” candidate who lead us from the wilderness.  Good candidates are coming forward the the goal remains to take back the House of Representatives in two years by switching at least 24 seats. That appears more and more possible but in the meantime, the destruction of so much will continue.

We are in Wisconsin at the moment—-causing “good trouble” as they say.  But we will be back in California in August for the Tevis and I hope to be back for part of September and October.

In the meantime, keep the pressure on McClintock, and every other Republican Congressman you can.  Also check the website occasionally for new additions.

And thanks again for your support of the Billboard project and other efforts.
Jerry (and Penny)